Ballymaloe relish the taste of Tesco partnership with UK deal 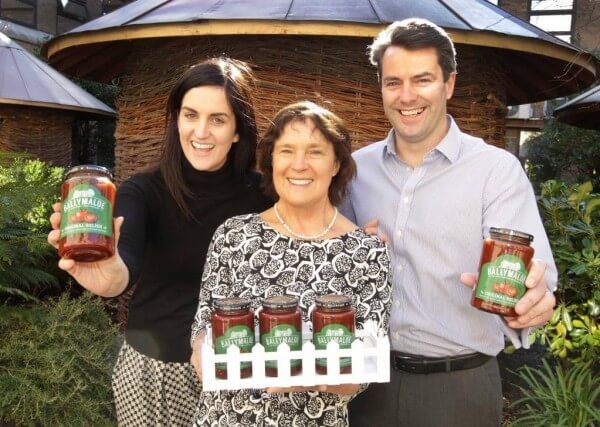 Ballymaloe Country Relish has secured one of the largest listings for an Irish company with Tesco which will see the brand’s original country relish stocked in over 900 Tesco UK stores from April 2015 with forecasted sales in excess of €500,000 for the rest of the year. This follows the brand’s participation in the Tesco supplier development programme with Bord Bia which initially saw the brand start to export to the UK in 2013 with Ballymaloe relish stocked in the World Foods section of 200 Tesco UK stores.

Ballymaloe is an Irish family-run business owned by Yasmin Hyde, daughter of Myrtle and Ivan Allen of Ballymaloe House. The savoury tomato relish is one of Myrtle Allen’s recipes from the 1930’s which her daughter Yasmin started to produce for local shops and restaurants 25 years ago in her kitchen. Yasmin quickly outgrew this small space and moved into purpose built kitchens in Little Island in Cork where the company Ballymaloe Foods employs a staff of 20 and now produces a range of delicious sauces and relishes using the best quality natural ingredients and no artificial additives.

Commenting about the announcement, Maxine Hyde of Ballymaloe Foods said “We joined the Tesco supplier development programme with Bord Bia during its first year in 2012 on the export level of the programme and following that year we secured a listing in the world foods section in a number of Tesco stores in London. Over the past couple of years we have strengthened this relationship, working with the Tesco Ireland team in Dun Laoghaire and we look forward to this next phase with our delicious relish lining the shelves in over 900 Tesco UK stores from next month.”

Tesco Ireland Commercial Director John Paul O’Reilly added “It’s quite fitting that we’re announcing this contract with our colleagues in the UK a few days before St Patrick’s Day and over Mother’s Day weekend. Ballymaloe relish is an iconic Irish product and the brand itself is an example of a passion for food and a sense of entrepreneurship being handed down through the generations of a family business from Myrtle Allen to her daughter Yasmin and her granddaughter Maxine. This versatile ingredient is a perfect accompaniment for sandwiches, cold meats, salads and we hope to see it lining the table of family barbeques in the UK this summer.”

Ballymaloe Country Relish is one of the 50 Irish food and drink companies that have participated in the Tesco supplier development programme with Bord Bia. 2015 will mark the fourth year of this comprehensive retail programme that aims to help food and drink companies achieve sustainable growth at multiple retail levels. The seven-month programme equips participants with the necessary skills required to secure, grow and maintain a listing with Tesco in Ireland and overseas. Some of the other well-known Irish brands that have participated in this programme and now export to Tesco UK stores include Lily O’Briens, Keoghs Crisps and Glenilen among others.

The Ballymaloe Country Relish will be available in over 900 Tesco UK stores from April.